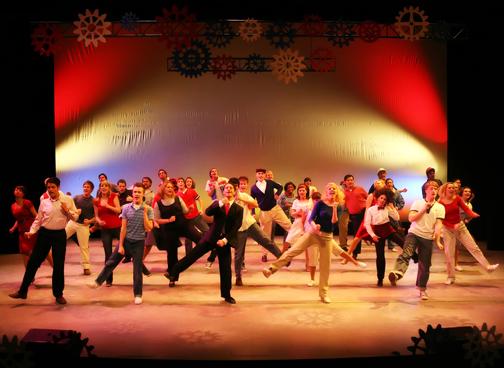 With the multitude of social and financial duress that our nation is facing today, no truer stage could be more relevant than that of the American worker. The laborers of America can rest easy now, knowing their stories will be conveyed by way of Northern Kentucky University’s newest production, ‘Working’.

The musical was originally a bestselling novel by the same name from Studs Terkel, who is best known for his oral histories of everyday Americans.

‘Working’ was brought to NKU’s Corbett Theatre through the direction of Ken Jones, who is playwright-in-residence and chair of the Theatre Department. The idea of a major production is nothing new to Jones, who has received an Emmy nomination and numerous awards for his talents as both a playwright and screenwriter.

The production begins with the lone iron worker, expressing the tales of his livelihood and daily woes. But before all is said and done, the musical runs the gauntlet of our nation’s working class. The characters in the musical are based on true stories derived from interviews Terkel made with actual workers across the U.S.

The musical, following the outline of the novel, consisted of fluid monologues- recounting the daily tasks and sometimes mundane responsibilities of each worker – only to be interrupted by way of song and dance. It should be noted that all of the production’s choreography was assembled and vetted by the NKU performers.

The production is a brilliant commentary on our nation and its labor force, questioning the pressure society puts on us to act in the capacity of our career. From the iron worker, the factory linesman, to the grocery clerk – the musical reveals all the excess baggage and stereotypes that are indelibly woven into our nation’s impression of any given career.

Set to whimsical and energetic dancing, the student production reveals the other side of each profession, showcasing the mosaic of jobs that make up America and how they are more than what the social connotations display. A teacher is more than a deliverer of lessons, a waitress more than a person who brings us food; beneath each label society imposes, resides a person with a host of interests and original talents.

The simplistic set of the production proved to afford an easy transition from one set change to the next. The white cube-like structures of mixed sizes that provided the backdrop of each working scenario prodded the audience to develop their own impression of atmosphere and surroundings.’

‘Working’ is full of many talents. Among the rising stars to look for in future shows is freshman Nik Alexzander, whose powerful rendition of Al Calinda, an elderly valet who makes an art of his god given gift to park cars, added depth and talent with captivating stage presence and spacious voice.

The waitress, played by senior Tina Diaz, was another performance that stood out above the rest. The slight framed Diaz conveyed the daily stresses and routine of a restaurant waitress, showcasing her talents with a surprisingly commanding voice and energizing dance routine.

Many more talents existed, too many to name, but they were all certainly adept at communicating the uplifting message that we can all have an ordinary career or job title, but in the end, be a unique and integral part of the American mosaic.