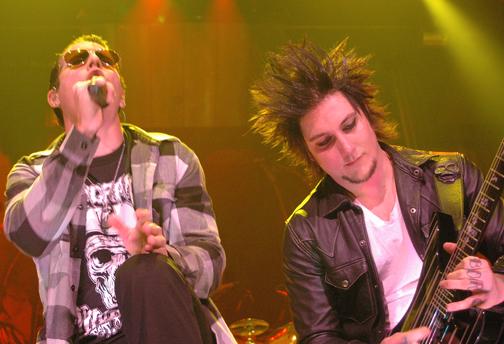 Sex, drugs and rock n’ roll invaded the Bank of Kentucky Center for the first time.

‘Saving Abel’ kick-started the evening, making the most of their limited stage time by playing, among other songs, ’18 Days’ and ending their set with their biggest hit, ‘Addicted.” Ending the set on such a high note kept the crowd energized and ready for ‘Papa Roach.’

As a frenzied crowd chanted ‘Pa-pa Roach Pa-pa Roach,’ the stage lit up red with a giant, skull infused ‘Papa Roach’ emblem on the wall behind the drums. Seconds later front-man Jacoby Shaddix leapt on to stage.

Feeding of a raucous crowd, Shaddix and company got the crowd out of their seats. They made the stage their own personal running track – leaping on and off speakers and racing from one side of the stage to the other. ‘Roach’ took the energy level to a new high, as Shaddix got not only the crowd to rise to their feet – but literally off their feet as well.

In what was to be a consistent theme for the rest of the night, a young and wild floor crowd engaged in the time-honored rock concert tradition otherwise known as bodysurfing.

As ‘Roach’ laid down tracks such as ‘Hollywood Whore,’ a sea of rabid fans passed surfers towards the stage – only to wipe out on a barrier surrounded by security guards. ‘Roach’ kept the octane level high as Shaddix yelled, ‘We’ve got time for one more. And I think you know what it is.’ All the crowd needed was the opening line to know.

‘Cut my life in to pieces. This is my last resort.’ Body surfers multiplied and beer consumption skyrocketed as ‘Roach’ ended their set with the crowd wanting more. They walked off they stage the same way they came on – with the chant, ‘Pa-pa Roach Pa-pa Roach.’

Still on their feet and ready for more, the crowd jumped and hollered as co-headliners ‘Buckcherry’ crept their way on to stage.

Front man Josh Todd walked out, microphone in hand, wasting no time getting in to the set list.

By the third song, ‘Lit Up’, Todd went from fully clothed to shirtless and the aroma in the BOKC went from cigarettes and nachos to beer and weed.

Halfway through the set, Todd shouted to the fans, ‘I understand this is the first rock show in this place. So we’re poppin’ some cherries tonight!’ Todd’s explicit soliloquy provided the perfect intro to their equally explicit hit, ‘Crazy Bitch.’

While the fans eagerly waited, a black curtain went up in front of the stage. After about 20 minutes, the fog machines on stage were rolling and the curtain came down to unveil the final act, ‘Avenged Sevenfold.’

It had been clear by the audience reaction to their appearance and the hundreds of people their dressed to the nines in ‘Avenged’ attire, that this was the band most every one had been waiting for.

A sea of fans went gonzo when ‘Avenged’ went into their much-lauded song, ‘The Beast and the Harlot.’ Bodysurfers rode the sea of fans as some made it past security as one nearly made it to the stage – only to be taken down to the ground by security guards twice his size.

The concert offered up a stark contrast to what the BOKC has been used to hosting. What was once a venue for the kid friendly ‘Wiggles’ and country star Carrie Underwood transformed into a pit of drug and alcohol infused debauchery. Rock n’ roll has finally passed through the BOKC and from the looks of how it went, will be back soon.